written by William Patton on May 22, 2012 in Projects with no comments
← older posts newer posts →

I made a Capacitive Stylus to use with the Photoshop app on my Samsung Galaxy Tab 10.1 Tablet and it works brilliantly. It was easy and took under a minute to do. I wrote a post about creating it here: How to make a Capacitive Stylus for Android/iOS Touch Screens. This one I made works better than the factory made one that I bought off ebay. I even got rid of the one I bought so that is testament to just how well this home made Capacitive Stylus works.

Android And The Software Version Dilemma 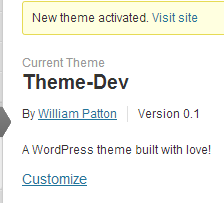 Building a WordPress Theme from Scratch – Starting a Theme